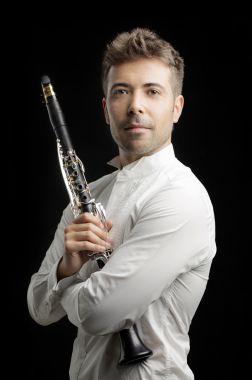 “ This evening it was Pablo Barragán who had you under his spell. In addition to his perfect performance style in all respects, it was precisely his soulful tone that kept you holding your breath in suspense.”

With music one can say what cannot be expressed otherwise. Music makes intangible things tangible and touches in a special way. From the first note, Pablo Barragán masterfully creates a connection to his audience. His performance is differentiated, elegant and perfectly nuanced. For each work the Spaniard creates his own color palette, even reaching sometimes for the basset clarinet.

As soloist and chamber musician, his performances lead him again and again through Germany and Europe, from the Philharmonie in Berlin, to the Bayerischen Rundfunk in Munich, the Laieszhalle in Hamburg, the Tonhalle Zürich, to the Konzertgesellschaft Basel, into the Auditori Barcelona and to the Athenaeum in Bucharest.

Pablo Barragán’s curiosity always leads him to new interpretive discoveries with orchestras such as the Sinfonieorchester Basel, Hamburger Symphoniker, the Orquesta de Radio Television Española, the Slovak Philharmonie and Chamber Orchestra, Macedonian Philharmonic Orchestra, or the Malaga Philharmonic Orchestra and with conductors such as Clemens Schuldt, Gabriel Feltz, and Christoph Poppen.

His musical friendship with Juan Pérez Floristán (piano) and Andrei Ioniţă (cello) led in 2018 to his highly praised debut recording of the Brahms clarinet trios and sonatas on the Spanish label IBS. Since then, the three have given performances in leading musical centers of Europe.

Barragán was awarded the Prix Credit Suisse Jeunes Solistes in 2013 and honored with an invitation to the Lucerne Festival in the same year. He is a prizewinner in numerous international competitions including the ARD Music Competition 2012, the Juventudes Musicales de España 2011 and the European Music Competition for Youth 2011 (EMCY).

Barragán studied at the Escuela Superior de Música Reina Sofía in Madrid before moving to Matthias Glander at the Barenboim-Said Foundation in Berlin. In 2009, he went to the Basel Academy of Music, where he studied in the master class of François Benda. Martin Fröst, Charles Niedich and Dimitri Ashkenazy also gave him new impulses in master classes.

Pablo Barragán is a Backun Clarinets Artist and performs exclusively on Backun Lumière clarinets. As a representative of D’Addario & Silverstein and as professor of the Orchestra Joven de Andalucía, he gives masterclasses in his home country to promote young talent. Since 2020, Barragán is professor of clarinet at the Barenboim-Said Foundation.