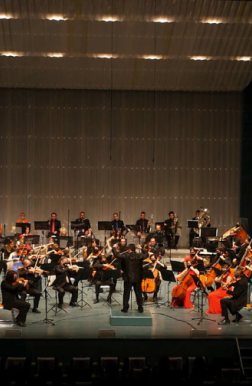 The Philharmonic Youth Chamber Orchestra is a 20-member ensemble of bowed string instruments that generally perform a repertory of pieces ranging from the Baroque Era to Contemporary works as well as compositions from Latin America and Colombia.

It is worth mentioning their performance of complete cycles of concerti grossi by Arcangelo Corelli, alongside works by Francesco Geminiani, Antonio Vivaldi, George Frideric Handel and Georg Philipp Telemann. A few of the many Colombian composers whose works have been performed by the Orchestra are Pedro Sarmiento, Fernando León, Felipe de Hoyos and Francisco Lequerica, among several others.

The ensemble has premiered works by Colombian and Latin American composers such as The Three Colombian Dances by Fernando León Rengifo, Trilogy of Andean Dances by Jorge Andrés Arbeláez and Fantasy for Classical Guitar by Jorge Cardoso.

This Orchestra has been on stage with world renowned figures like Krzysztof Penderecki, Jeff Manookian, Maxim Novikov, Gianluca Marcianó, Gabriel Ahumada and Simón Gollo all of whom gave high praise to the artistic level of the group.