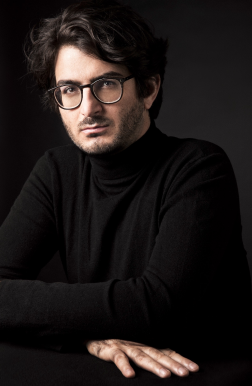 Hailed by the New York Times for his “magnificent sound and breath of expression”, pianist and composer Matan Porat has performed in distinguished venues including the Philharmonie in Berlin, Carnegie Hall, Wigmore Hall, Concertgebouw Amsterdam, Auditorium du Louvre in Paris and Alte Oper in Frankfurt, and with orchestras such as the Chicago Symphony Orchestra, Sinfonia Varsovia, Polish National Radio Symphony Orchestra, Helsinki Philharmonic, and Hong Kong Sinfonietta.

Known for his unique, narrative-based programming, Porat’s varied repertoire ranges from the complete Bach Partitas and Schubert Sonatas to Ives’ Concord Sonata and the Ligeti piano concerto. His debut CD for MIRARE, “Variations on a theme by Scarlatti” – a 65-minute program of pieces from Couperin to Boulez which all relate to Scarlatti’s Sonata K. 32 – was praised as “a fantastic album that one should hear over and over again” by the Frankfurter Allgemeine Zeitung.

His following CDs, “Lux”, a recital of pieces around light, from dawn to nightfall and “Carnaval”, a recital around Schumann’s Carnaval op. 9, have won 5* in Diapason and Classica magazines.

His love for the performing arts has led him to collaborate with legendary director Peter Brook, touring with his production of Mozart’s Magic Flute for piano solo and 7 singers; with the Ballett am Rhein in the Opernhaus Düsseldorf and with the music theater group Nico and the Navigators in Bozar and Konzerthaus Berlin.