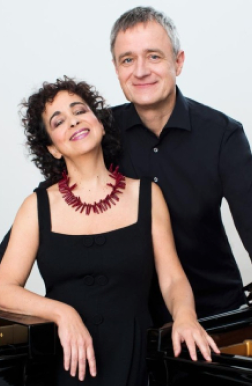 Besides an unsurpassed homogenity and spontanity in their playing, the duo displays great creativity in their recital programmes which feature unjustly neglected musical treasures in addition to the standard repertoire, as for example the “Concerto for two pianos and orchestra” of Ralph Vaughan Williams – which they played with Gewandhausorchester and Musikkollegium Winterthur, amongst others, or works for two pianos and chamber orchestra by Czerny, Lipatti, Bach and Veress.

Their repertoire for two pianos is manifold: besides popular compositions as Mozart sonatas or “Til Eulenspiegel” by Richard Strauss, Tal & Groethuysen play works by unknown composers such Babin or Casella. They regularly inspire their audiences with the Rheinberger/Reger transcription of Bach’s Goldberg Variations. They nevertheless don’t neglect the piano literature for four hands. Thus Schubert, Dvorak‘s „Slawische Tänze“, as well as rarely heard arrangements, such as Mendelssohn Oktett, the Hebrides‘ Ouverture for four hands, or Brahms’ arrangement of his piano concerto no. 1 for four hands.

The exclusive cooperation with the record company SONY CLASSICAL (more than 35 CDs in their over 30 years spanning career) makes up an important part of their international success: The Duo Tal & Groethuysen has released numerous recordings of piano music for four hands (largely world première recordings which have brought them great acclaim from critics and the public alike. Their CDs have won the coveted “Preis der Deutschen Schallplattenkritik” no less than ten times, while the German Phono Academy has awarded its “ECHO Klassik”-Prize to five of their recordings, including the complete recordings of Schubert’s music for four hands and the complete Mozart piano duos. Other awards from outside Germany, such as the “Cannes Classical Award“,“Editor’s Choice“ by Gramophone and the “Supersonic Award“ reflect their high international reputation.

Past releases include the highly acclaimed CD “Götterdämmerung” (2013) with arrangements by Debussy, Dukas, Reger and Alfred Pringsheim (world premier recording) for two pianos. The recording has been awarded with the “Preis der Deutschen Schallplatten Kritik” in the category piano music. After a further album released in 2015 called 1915, including works of Claude Debussy and Reynaldo Hahn (and awarded with the “Preis der Deutschen Schallplattenkritik”), the latest release, called Colors, includes two-piano transcriptions of orchestral pieces by Claude Debussy and Richard Strauss.

Since the semester 2014/15 the duo has been appointed to a professorship at the Mozarteum Salzburg.

Highlights of the past season were invitations to Frankfurt Radio Symphony Orchestra, to Cologne (WDR), twice to Hamburg Elbphilharmonie and several presentations of the 2019 recorded and for Tal & Groethuysen composed work “18 studies about Bach’s The Art of the Fugue” by Reinhard Febel. At festivals such as Soli Deo Gloria, Bachwoche Ansbach and Schleswig-Holstein Musikfestival the duo celebrated great successes with this work.

The 2019/20 season comes, among others, with invitations to Chicago and Montreal Bach Festival (again with R. Febel’s Studie about Bachs The Art of the Fugue), to Konzerthaus Berlin, Klavierfestival Ruhr and Mozartfest Würzburg. Highly expected is the release of the recordings of the Concertos for 2 pianos and orchestra by Anton Eberl and Jan Ladislav Dussek with Frankfurt Radio Symphony and Reinhard Goebel from December 2018, as well as the „18 Studies about Bach’s The Art of the Fugue” by Reinhard Febel, comprising a double CD.