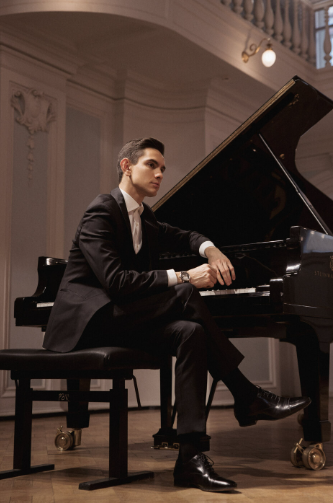 “More notable than the limpid clarity of this passagework is the subtly imaginative pointing to his phrasing  – something that bodes well for a life beyond familiar repertoire.” Gramophone

“Dmitry is a flamboyant pianist, of great musical honesty and rigor. We have awarded musicians that we have come to know and who have proven to be complete and brilliant in other repertoires. ” Tribune de Geneve

Dmitry Shishkin is a critically acclaimed Russian pianist who has been highlighted for both his creative and individual approach to music, as well as his brilliant piano skills by the international press. “In his playing we can hear both excellence and playfulness.” He was awarded a silver medal in June 2019 at the prestigious 16th International Tchaikovsky Competition and won the first place prize in November 2018 at the 73rd Geneva International Music Competition where he performed with Orchestre de la Suisse Romande.

Born in Chelyabinsk, Siberia, Dmitry demonstrated an exceptional talent for the piano at a very young age. He performed his first recital at the age of three and orchestra concert at the age of six.  He then entered the prestigious Gnessin Moscow School of Music for gifted children (class of Mikhail Khokhlov) at the age of nine and then attended the Moscow Tchaikovsky Conservatory (class of Eliso Virsaladze). He has also studied in Sicily at the “Vincenzo Bellini” State Conservatory in Catania with Epifanio Comis, and in Hannover at Musikhochschule with Arie Vardi.