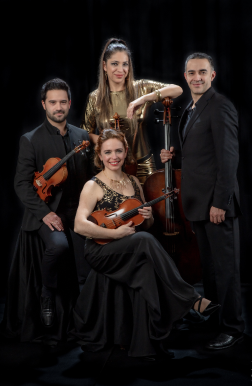 Nominated for a Grammy Award in 2020, Cuarteto Q-Arte (Q-Arte String Quartet) is acclaimed as one of the most outstanding string quartets in Latin America. Founded in 2010, it has focused on researching, performing and disseminating quartet music produced in the continent. Its repertoire includes more than a hundred works written by Latin American composers, which it has performed in various concert halls and festivals in the Americas and Europe.

It has developed collaborative projects with notable performers such as Rodolfo Mederos, Günter Haumer and the Cuarteto Latinoamericano, and with composers such as Gabriela Ortiz, Mario Lavista and Gustavo Leone, among others. Likewise, within the framework of the work he has done to disseminate the music of Colombia, his close relationship with the famous composer Blas Emilio Atehortúa, of whose works for string quartet he made critical editions and recordings, stands out.

The members of Cuarteto Q-Arte, Colombian musicians trained in some of the main conservatories in Europe and the United States, are also professors at the Universidad Nacional de Colombia, the Pontificia Universidad Javeriana, the Universidad de los Andes and the Universidad Sergio Arboleda. Their activity as teachers and researchers feeds their artistic work and allows their work to maintain a constant dialogue with the academic community of the arts and music. Within this framework, the Q-Arte Quartet has collaborated with institutions such as the University of Chicago, Columbia College Chicago, the University of Kent and the Instrumenta Oaxaca Festival, conducting master classes, seminars and reading sessions of works with composers from different countries.

In 2014 the Q-Arte Quartet created the international festival FestiQ-Artetos, a biennial event based in Bogota in which professionals, students and general public from around the world gather for an agenda of concerts, workshops and lectures around music for string quartet. The festival also includes the National String Quartet Composition Competition, a platform that allows the work of Colombian composers to be disseminated and generates exchange between creators and performers.

The Q-Arte Quartet was nominated in 2017 for the Innovation Award at Classical:NEXT by virtue of its work with a transdisciplinary approach and its interest in experimentation from musical practice. Future projects include its regular appearance in the main concert halls of Colombia, its collaboration with notable composers and the development of programs in dialogue with other artistic and cultural manifestations.