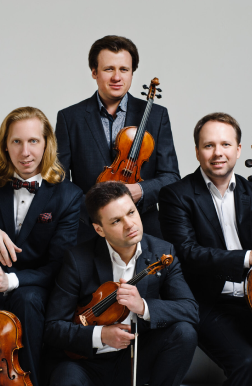 The David Oistrakh Quartet frequently performs across Europe, Asia, USA, South America and at many of the most recognised Russian venues, including all of the country’s famous philharmonics halls. They have had the honour to play at various renowned festivals, collaborating with such celebrated artists as Eliso Virsaladze, Eduard Brunner, Liana Isakadze, Andrey Gugnin, Boris Andrianov, Kirill Gerstein, Alexander Buzlov and Daniel Austrich.

After their impressive debuts in Japan, Hong Kong, at the Prague Spring Festival, the Quartet Festival at the Gulbenkian Foundation in Lisbon, Bienale Quartet Festival in Philharmonie de Paris, Wigmore Hall in London, the Pierre Boulez Saal in Berlin, the Liszt Academy in Budapest, the Bratislava Festival, the Konzerthaus in Dortmund, the Palau de la Música in Valencia, the Auditorio de Barcelona, future engagements will continue to bring David Oistrakh Quartet to the most prestigious stages and festivals of the world.

The Second Violinist of the Quartet, Rodion Petrov, is a graduate of the Moscow State Conservatory and Reina Sofia Music Academy in Madrid. Rodion is a prize-winner of numerous competitions including Premio Paganini in Genova in 1997. He has appeared as a soloist in Russia, Europe and Asia at such concert halls as Auditorio Nacional in Madrid, Great Hall of Moscow Conservatory and Suntory Hall in Tokyo, and is a regular participant at many of the world’s great music festivals.

Violist Fedor Belugin is laureate of a number of international competitions, first prize winner of the Swedish Duo Competition together with pianist Alexander Osminin. Since 2006 Fedor is Professor at the Moscow State Conservatory. He is one of few violists to pursue a busy solo career alongside his quartet engagements. During an important period of his career he was Violist of the Shostakovich Quartet. In 2018 he founded the “Forge of Violin Artistry”, a private music boarding school in Moscow for young musicians.

Cellist Alexey Zhilin is considered one of the leading cellists of his generation in Russia. He has won a number of international prizes and appears frequently as a soloist with chamber and symphony orchestras in Russia and Europe. He is Professor of cello at the Saint-Petersburg State Conservatory. In 2018 Alexey won the J. Brahms Competition in Austria, both as a cello soloist, and in duo with pianist Andrey Baranenko.

In the first few years of the Quartet’s existence, Baranov, Belugin and Zhilin had the honour to work with Sergey Pischugin, as a second violinist – a renowned chamber musician in Russia. A former student of David Oistrakh, Professor at the Moscow State Conservatory and member of the legendary Shostakovich Quartet, Pischugin played a vital role in the founding of the David Oistrakh Quartet.