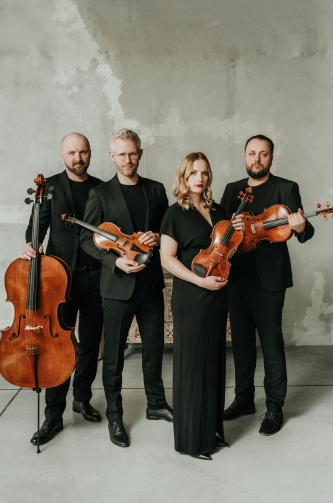 Established in 2007, the Meccore String Quartet is one of Europe’s most compelling ensembles. Since many years they have been a treat for music lovers and have performed in many prestigious concert halls such as the National Phil­harmonic Hall in Warsaw, Elbphilharmonie in Hamburg, Beethoven-Haus in Bonn, Auditorio Nacional de Música in Madrid, Wigmore Hall in London, Bozar in Brussels, Concertgebouw in Amsterdam, Musikverein in Vienna, Pollack Hall in Montreal, Frick Collection in New York. During their tours, the musicians appear at the most important music festivals such as Rheingau Musik Festival, Festspiele Meck­lenburg-Vorpommern, L. van Beethoven Easter Festival, Budapest Spring Festival, Heidelberg Frühling Musikfestival, Kissinger Sommer Musikfestival, Festival Radio France Montpellier, Bregenzer Festspiele. The ensemble had the honour to perform, as the first ever Polish String Quartet, during the ceremony on Holocaust Remembrance Day in the German Bundestag.

The quartet has received numerous awards during prestigious chamber music competitions. In 2012 Meccore won a 2nd prize, as well as awards for the best per­formance of classical string quartets, and for the best performance of Brett Dean’s obligatory composition at the Wigmore Hall String Quartet Competition in London. A year earlier they obtained the finalist award and the special award for the best perfor­mance of the obligatory composition by Giya Kancheli at the International String Quartet Competition “Premio Paolo Borciani” in Reggio Emilia. In 2010 the quartet won the 1st prize at the International Chamber Music Competition in Weiden (2nd and 3rd prizes were not awarded) as well as the 1st prize of the Max Reger International Chamber Music Competition in Sondershausen. A number of international distinctions brought the Meccore String Quartet nomination for the “Paszport Polityki” award in the clas­sical music category for their “innovative approach to the music and for breaking the musical stereotypes”.

With the support of the Irene Steels – Wilsing Stiftung the quartet released their debut CD album as well as their second disc, which was granted the “Supersonic Award” by the classical music magazine “Pizzi­cato” and received two nominations for the Polish Society of the Phonographic Industry music award “Fryderyk 2016”. Their third album with string quartets by Edvard Grieg received many distinctions along with nominations for the “Fryderyk 2018” award and “Preis der Deutschen Schallplattenkritik”. The latest CD with String Quartets and Sextet “Souvenir de Florence” by Pyotr Ilyich Tchaikovsky, featuring Isabel Charisius and Valentin Erben of the legendary Alban Berg Quartet, has been praised by reviewers and received the “Pizzicato Supersonic Award”.

The quartet was at first tutored by the members of the Camerata Quartet. They then studied with the Artemis Quartet at the Universität der Künste in Berlin and Queen Elisabeth Music Chapel in Brussels. Meccore String Quartet further developed their skills with Günter Pichler (Alban Berg Quartet) at Escuela Superior de Música Reina Sofía in Madrid. An impor­tant event in the artistic life of the quartet was their participation in the course on interpretation of Ludwig van Beethoven’s music held by Alfred Brendel.

Members of the Quartet are also active in the pedagogical field, leading chamber music and instrumental classes at Fryderyk Chopin University of Music in Warsaw, Ignacy Jan Paderewski Academy of Music in Poznan and Krzysztof Penderecki Music Academy in Cracow.