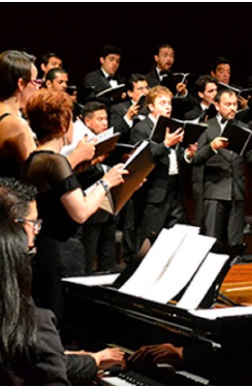 The Coro de la Ópera de Colombia began its work in 1992, together with the Nueva Ópera de Colombia, with the specific function of consolidating itself as an interpreter of the lyric genre and being a fundamental part of each of the titles of the opera season of the Fundación Camarín Del Carmen.

His repertoire includes more than fifty great works of universal lyric literature, including opera, zarzuela and symphonic-choral works. In 2013, it premiered Wagner’s Tannhauser in Colombia, conducted by Gustavo Dudamel with great success. For several years, he participated in the Festival Ópera al Parque, organized by the Mayor’s Office of Bogotá. He has been invited to the Cartagena Music Festival in 2011, with J.S. Bach’s Mass in B minor; in 2014, with La Cenerentola; in 2017, with The Marriage of Figaro, and in 2019 with Così fan tutte.

He has premiered in Colombia, among others, Mahler’s Symphony No. 8, Britten’s War Requiem, Stravinsky’s Oedipus Rex, Einhorn’s Voices of Light and Zyman’s Sacrifixio. In 2017, he premiered S. Tanieyev’s cantata Johan Damascus, as well as several a cappella pieces from the Russian religious music repertoire. He recorded the first symphonic DVD in the country, Verdi’s Requiem, with the Orquesta Filarmónica de Bogotá and the direction of Andrés Orozco-Estrada.

He participated in the first production of the Instituto Distrital de las Artes and in the reopening of the Teatro Colón. He has collaborated with the Teatro Mayor in several productions, among them: Viva Madrid, Carmina Burana, Carmen, Luisa Fernanda,
Rigoletto, Mozart’s Requiem and the festivals Bogotá es Mozart, Bogotá es la Rusia Romántica and Bogotá es Brahms. With the Teatro Colón, he has collaborated in Black, the Clown, Macbeth, Cecilia Valdés, Otello and The Messiah. He was invited to sing at the Peace Accords ceremony in September in Cartagena and to sing at the reception of Pope Francis. In 2019, together with the Orquesta Filarmónica de Bogotá and the Coro Filarmónico Juvenil they premiered in Latin America the Requiem by Enric Palomar. That year, it also participated in the Zarzuela Season of the Jaime Manzur Foundation.

During these 29 years, the Opera Choir has had as conductors Gustavo Yépez, Juan Carlos Rivas, Alejandro Zuleta and Luis Díaz Hérodier, who has been its conductor since 2002.

The members of the choir are mostly students and graduates of the different music faculties of the country and many of their voices are emerging as future promises of national singing.