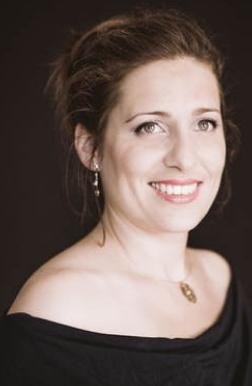 Pianist Ariane Haering was trained in her home town La Chaux-de-Fonds, Switzerland, by Cécile Pantillon and Catherine Courvoisier, in the U.S.A. by Clifton Matthews and by Brigitte Meer in Lausanne. She was 20 when she completed her studies with the Premier Prix de Virtuosité avec les Félicitations du Jury.

She has won many national and international competitions; she represented Switzerland at the Eurovision competition in Brussels. She won the Concerto Competition at the University of North Carolina, U.S.A, and has received many awards, among them the Prix l’Express, Prix Miéville, Prix Rotary and Jeune Soliste de la Communauté des Radios Publiques de Langue Française. She has been soloist with renowned orchestras such as the Zurich Tonhalle, the Houston Symphony Orchestra, the Orchestra della Svizzera Italiana, the Lausanne Chamber Orchestra, the Orchestre Symphonique Neuchâtelois, the Mozarteum Orchestra, the Bavarian Radio Chamber Orchestra ad the Johannesburg Symphony Orchestra.

She has been playing four-hands regularly with Ardita Statovici along with the two-piano literature, guesting throughout Europe with their Duo Ariadita.

She has been a permanent member of the newly-founded Vienna Alban Berg Ensemble since 2016; it has been a central part of her musical life ever since.